We always need to be aware of not only just about every facet of still photography, but also of the many roles that cinematography may play in documentation, advertising, or any other aspect of the job. A corporate film is a reflection of the corporate entity. When a film is made its success is reliant on many things such as the script, the camera work and the Director. The film however works because of the vision behind it. We believe that moving images are poised to replace the printed word as the most persuasive and cost-effective medium for corporations to reach their target audiences. Black box has full Pre production, production and post-production capabilities to create visually exciting motions. Corporate Films I Business Presentations I Training videos I TV Commercial I Theater commercial I Product videos I Industrial Safety videos

The production refers to the shooting days. This is the point where all those best laid plans are fulfilled. If everything is well prepared, shooting will go smoothly. We work with an experienced team but it is recommended that your company key people are either ‘on floor’ or easily contactable on the production days. Our camera crews and technical team are all highly experienced.

The post-production phase of any project involves editing and the editing involves manipulating the clips in such a way that the message comes across most effectively. Here, music is added, captions and graphics devised and a voice over added if required. This procedure also involves some processes like grading, where the colours of the footage are tweaked to obtain a particular atmosphere or effect. 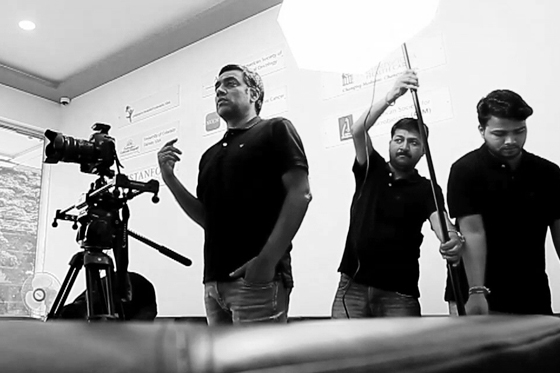